Posted by Brue Surf Cru at 9:48 AM No comments:

Blue Surf Cru at it again:)

Whats up Everybody...I know its been awhile since the last posting but its been a crazy month of surfing and parties to attend. In between all the excitement i had to find time to sleep. So here I am today to update you the latest news. 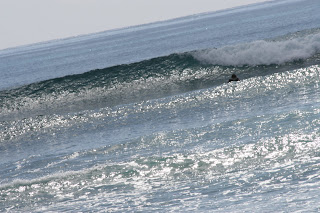 On March 22, 2009 the surf cru entered the HASA contest. The contest was schedule for Sunset but due to lack of size it was relocated to Sandy beach. Not sure if that was a good call because the conditions at sandys was terrible. The surf was a stormy 1-3 feet with some very strong winds and currents. The winds were so strong that if we would have set up the tent, we would have definitely lost it to the wind. As to the rip currents, while Nicole, Devin, and other competitors were paddling in at the end of their heat; they got stuck in the rip current that just about took them to gas chambers. That was a heart pounding moment with a happy ending. They made it to the beach but they had a long walk back to the contest area.
But with the conditions being so terrible, the surf cru made the most of it by surfing hard and having fun while doing so. What was even better they took home some hardware in the process.

Volcom Surf Contest Maili Point
March 28, 2009
The boys (Jackson, EJ, Jordan, and Devin) of the Blue Hawaii surf team enter the Volcom surf contest with the hopes of earning an invite to the Volcom championships in California. Again we were greeted with conditions that were not favorable to surf in. It was 1-2 feet and very inconsistent. We were wondering if they were even going to hold it. and to our surprise they did. But thats what contest are all about. You need to be ready to go in all conditions no matter what it looks like.
The first rounds weren't that friendly the most of the surf cru. Jackson, Jordan, and Devin were eliminated in the first round in their respective divisions. As for EJ, he was on fire and it looked liked he could not be stopped. He advanced all the way to the finals with the possibility of earning an invite with a 5th place finish or better. In the finals EJ was surfing really good once again and he surfed to a 6th place finish. Man that was a close one, but he did an awesome job of surfing out there. We will wait and see if he gets that invite. Cross your fingers gang.

Well your updated with the latest.
Till next time...peace
Posted by Brue Surf Cru at 10:07 PM No comments: